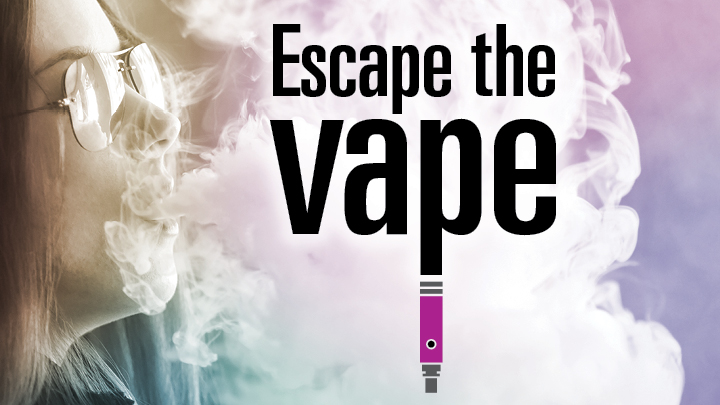 The emergence of fruit and menthol flavoured vapes have gotten users and their devices attached at the hip. If you’ve ever experimented with e-cigarettes, been asked to hit the vape or caught a glimpse of recent headlines, you have likely heard about the growing vape epidemic and its susceptibility towards youth.

E-cigarettes (a.k.a. vapes) are a handheld vaporizer that allows individuals to inhale an aerosol. Heating elements inside convert liquid nicotine into a vapor that the individual blows out. Juul is a company known for its slim e-cigarette devices with a design that resembles a USB. Their inconspicuous design make them easy to store, carry and use. Plug-in pods contain varying nicotine percentages and an array of flavours.

For those who have never vaped, its popularity is hard to ignore with increased prevalence among teens and youth. Billowy puffs of smoke decorate busy streets and stores selling the coveted pen pop up around every corner. Recently, cases of exploding vapes, lung problems and seizures linked to vaping have health care professionals urging youth to think twice about hitting any e-cigarette device.

Can vaping be used as a smoking cessation tool?

The initial surge in vaping was due to its design as a tool to help curb cigarette use. Instead, marketing of flavoured vape products have targeted teens and youth, many of which have never smoked prior to vaping. A 1-year Canadian study from 2017-2018 showed that an increase in vaping prevalence was also accompanied by an increase in smoking among young adults.Vaping comes with harm and is strongly advised against for non-smokers. Other tools can be a safer and more effective tool for smoking cessation.

One Juul pod typically contains around a pack of cigarettes worth of nicotine and some users report finishing over a pod’s worth in just one day. Since their surge in popularity, Juul along with other companies have bumped up the amount of nicotine in their products. Nicotine addiction changes brain chemistry and our reward systems, similar to drugs like cocaine, heroin and alcohol. This is particularly harmful before the brain becomes fully developed at around age 25. Many also note vaping to be a gateway drug into smoking cigarettes, cannabis and other drug use.

Health Canada reported its second confirmed vaping related illness in late October. These few are among the thousands of illnesses, hospitalizations and deaths that have been reported in the United States. Although most vaping related deaths have been due to the black market of THC vape (the psychoactive ingredient in cannabis), pulmonary and cardiovascular problems have arisen in nicotine based products as well.

The e-cigarette industry says that its aim is to target existing smokers but the appeal to youth and non-smokers has spiraled the industry out of control in recent years. New policies and cautionary tales have caused an emerging trend of people throwing their devices out of their windows or into toilets. Will it be enough to escape the vape?

Looking to reduce or quit smoking?